Sometimes, I start cooking with no idea of what the end result will be.  I just go with it. This was one of those times.  I shredded the hearts of palm, threw them in the pan and let them brown and almost char up a bit, they resembled shredded chicken, then it hit me.  Tinga! It worked, and it was good, really good. The combination of spicy chipotle and cool cashew cream is delectable. You can also use this as a taco filling, but that crunchy texture from the tostada is the cherry on top! 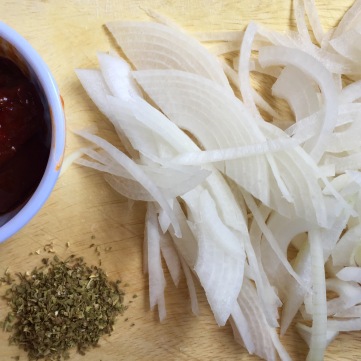 Step 1 – drain and rinse the hearts of palm, slice each one into halves lengthwise and thinly slice each half into shreds, make sure your knife is sharp; remove and discard the seeds from the chipotle peppers, chop them into small pieces; heat a nonstick pan over med/high, add 2 tbsp oil and add the shredded hearts of palm, saute for about 10-12 minutes, stir in the oregano and cook until golden brown, stir to avoid burning; when done add the lemon juice, transfer to a dish and set aside.

Step 2 – in the same pan add 2 tsp oil, the sliced onion, a pinch of salt and cook until caramelized; return the hearts of palm to the pan, mix to combine with the onion, add the chipotles, adobo, 1/2 tsp salt and the vegetable broth; cover and simmer for 10 minutes or until all liquid is absorbed, taste and adjust seasoning if needed.

Tinga is traditionally served as a topping on tostadas with crema, lettuce, salsa, avocado and crumbly cheese or can also be a taco filling. Enjoy!